2X Power: The Power Combo of MFGM and DHA 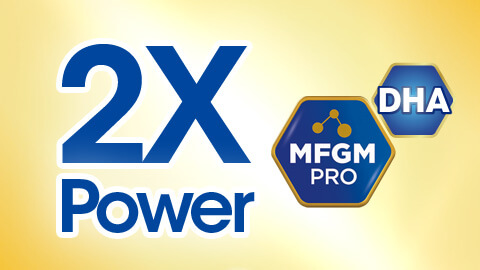 What does 2X Power mean?

2X Power is the powerful combination of MFGM and DHA.

The Milk Fat Globule Membrane or MFGM is the milk fat’s coating, which is rich in life-enhancing components that help support your child’s brain development and immunity. 1This super ingredient can now be enjoyed with MFGM PRO, the biggest breakthrough in milk nutrition that is exclusive in the new Enfagrow A+ Four. Now working with brain-nutrient DHA, this powerful combo helps support better cognitive development as well as behavioral regulation.

What are the benefits of giving my child 2X Power?

When you give your child 2X Power, it means you’re helping him get the advantage of being intellectually and emotionally advanced. Scientists have seen that MFGM, together with DHA, helps improve kids’ IQ and EQ–which means there’s a significant improvement in reading, spelling, problem-solving, reasoning, memory, attention, language skills, and behavior. 2-3

How do I give my child 2X Power?

With the right nourishment, giving your little one 2X Power is easy.

Focus on giving him brain-building foods with DHA such as salmon, bluefin tuna, black cod, sardines, and herring. DHA is also found in shellfish and organ meats.4 And while you’re at it, pair any dish with milk that’s both rich in DHA and MFGM for 2X Power.

Remember, it’s not only about giving him the right nutrients but also the right amount. Help boost his brain development with MFGM PRO and the highest levels of DHA that can only be found in the new Enfagrow A+ Four, now with 35 mg of DHA per serving*.

Power up your child’s IQ and EQ development. Give him 2X Power today.

* Highest levels of DHA among children's milk brands based on label declaration.