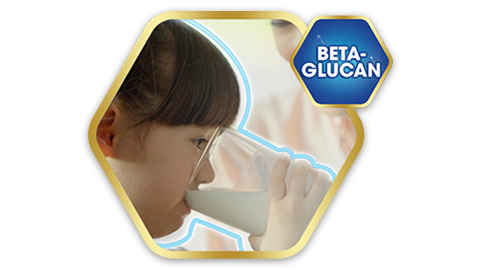 Get to know the immunity nutrient found exclusively in Enfagrow A+ Four.

Protecting kids’ health isn’t easy—especially when they leave home. We can never predict what harmful germs they may pick up. So moms wonder: How can I keep my child from getting sick?

As if it isn’t bad enough that kids suffer a blow to their health, they have to miss out on learning opportunities in school.

But you can cast your fears aside by helping your child strengthen his immunity starting today, with Enfagrow A+ Four.

Based on a clinically proven blend, this formula can boost your child’s defenses so he can have less sick days. It contains a valuable ingredient called Beta-Glucan—a revolutionary nutrient known for its immunity-strengthening powers.

What is Beta-Glucan, and where is it found?

Beta-Glucan belongs to the polysaccharide family and is naturally found in baker’s yeast, certain fungi, cereal grains such as oats and barley, mushrooms, and even some algae. Found in leavened bread products, its immunity-enhancing ability has been present for centuries in the common diets of humans.

What makes Beta-Glucan even more special is that it works well with other beneficial nutrients like Prebiotics PDX and GOS (which promote immune health too) and DHA (which supports brain development) – all found in Enfagrow A+ Four!

With less sick days, your child can be present in class for more learning opportunities.

A Healthy Child Learns More
A child's superior learning begins with brain-building nutrients such as DHA, a powerful substance...
Learn more
DHA & Prebiotics
Know what they are and how they help your child         Ensuring your child's proper brain...
Learn more
Your Child’s DHA Levels Matter
Is you child getting the highest levels of brain-nutrient DHA for her healthy brain development?
Learn more